Back to all posts

Sunday. Turning the corner at the road, backpacking a spice loaf and a dozen of cookies down the valley road to the neighbour's, dressed severely, for warmth, for comfort into the icy West winds while marveling the wonders another winter day has to offer. Same route, different day, encountering creatures like me and unlike me along the way, creek ice drawing new images, birds conducting according to the weather.

This never gets boring. Especially today, when, at the next turn in the distance, about 50 feet away, a German shepherd comes trotting leisurely around the bend. He stops in his tracks upon seeing me walk swiftly towards him. I stop. We both ponder. He skittishly dance-steps around 180 degrees and trots back around the corner into invisibility.

Hm.. Someone must have lost their dog. I stop at the creek to place my offerings in gratitude for being here. On Earth. Again. Being allowed to witness another glorious day alive in Nature.

I pack my tobacco into the pouch and stuff it into my pocket, quick to slip my woolen glove on again; the cold bites. Back in strut, I near the turn. There, he comes again, casually running towards me, we look each other into the eyes, eagerly walk towards a certain encounter. I plan my strategy. Having had my arm mauled by a 'friendly' dog as a child, my love for animals is still fierce, yet slighted when in contact with an unknown dog.

Suddenly, in mid-strut, the dog jerks sideways and leaps over the 6 foot snowbank into the poplar-elder forest. I am stunned. No dog would labour away into the brush, into deep snow like that. Instantly I know:

This stately animal was a lone coyote or brush wolf.

Later I snowshoe up the mountain and on the old snowmobile trail, I see first coyote tracks, at the 'Y'  merging into 3-4 apart timber wolf tracks.

We have not seen sighting and tracks like these here in years. We heard the animals hauntingly howl, bark and yipp in the hills and in the brushed-in fields, but not seen them or their tracks close to the house. Lots of rabbit tracks abound. It's been a tough winter so far... 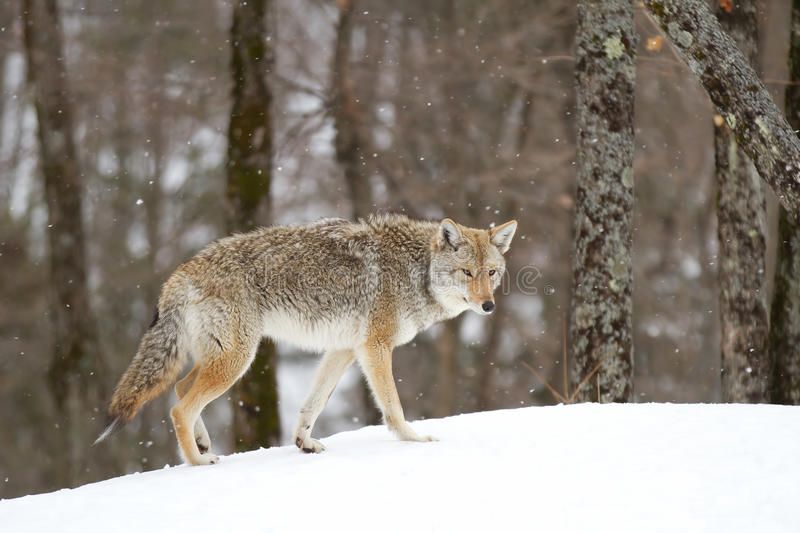